Remembering your previous Indesign preferences is a good idea, take screenshots etc. if required. Clearing preferences will clear the shortcuts that you have setup and other things! 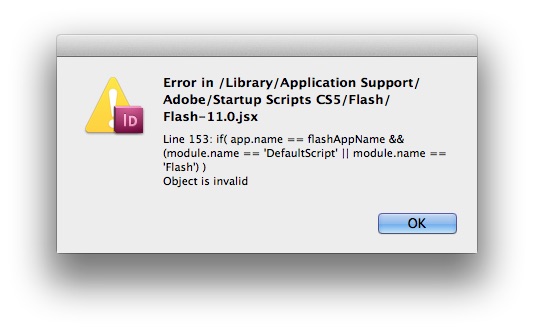 There are 2 ways to clear the InDesign Preferences file, this is recommended if you get the following javascript error on startup of InDesign after installation of the plug-in.

Windows: Ctrl+Alt+Shift, when prompted press 'Yes' to delete preferences file, this will clear all keyboard and reset InDesign as if you installed it for the first time.

Option 2. If you can't get that to work or you would like to save the current preferences file for some reason, do the following:

Mac OSX Lion (10.7): The Library folder is hidden and you need to access it, do this: Open any folder and press Cmd+Shift+G

and press Go, then go to: Preferences > Adobe InDesign > select the version (Version 5.0 = CS3) > Find the file called InDesign Defaults. Once you have done that you can either rename, save or just delete it. Then restart InDesign and it will create a new preference file.

Below is directions for Windows:
InDesign Defaults: Windows XP: C:\Documents and Settings

In some earlier versions of ID, InDesign SavedData may also be found in the first directory. Hopefully this will help you solve the Javascript error that some get.