According to some of our tests it seems that files created in CS5 and CS5.5 in version 3.1 or later is affected of the issue mentioned in this article (however this could vary). Starting from version 4.2 both CS and CC use the same method for saving/writing data into InDesign files (release fall 2013).

Starting from version 3.1 we had to make some changes in order to improve how the plug-in works, the changes were highly needed and this had an affect were certain files created with previous plug-in versions simply could not be edited nor opened in newer InDesign/plug-in versions and you would get a message like shown in the image above.

However there is a simple solution that will allow you to at least open the file created by the plug-in but it will not be editable by the plug-in (not even if you resave it in the most current InDesign version or as an IDML file as that will discard all settings and basically reset all settings once you edit the file in the plug-in), this is due to how the new versions process data written into the InDesign file which was needed in order to correct bugs.

In version 4.2 of the plug-in for Creative Suite (last supported version for CS) and 4.2 for Creative Cloud the same method is used when saving InDesign files and therefore opening CS files in CC is more reliable. 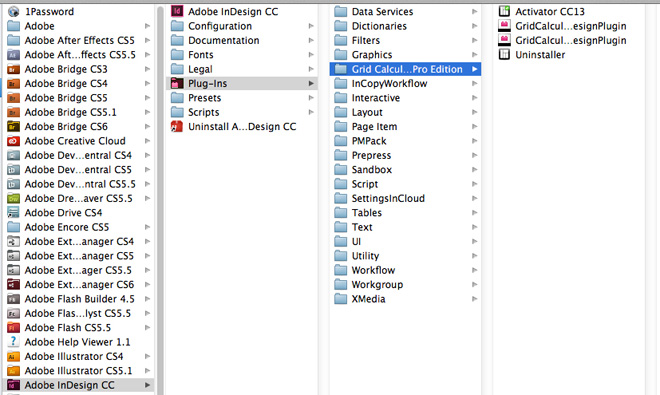 • Temporarily move the plug-in folder to your Desktop location, when you move it make sure to NOT copy or create a shortcut (for example in Mac you simply need to select and move the folder while holding down Cmd). It is important that the plug-in folder called Grid Calculator Pro Edition is moved as it will otherwise disturb InDesign when you try to open the file.

• Start InDesign again and you will see that the plug-in menu is gone from the toolbar. Open your file and once finished simply move back the plug-in folder from the Desktop to its original location, restart InDesign and plug-in will once again be available.